My salmon summer has come to an end and I am currently involved in my trek back home, from one end of the country to the polar opposite.  Our Monashka Creek project has ended as the Chinook have finished running, and the active season is slowing considering there’s not much that can be done in the field over winter.  Earlier in the week we completed our final weir check—which had recently been overflowing with the Pink salmon that are in the height of their run—and dismantled the metal contraption we had formed a summer love-hate relationship with.  It was bittersweet due to the many hours spent bonding with the weir and visiting it each and every day to see if any Kings had come home, yet our excitement about sleeping in for the first day all summer squandered any sorrow.  Thankfully our weir is one of the smaller projects and I was pleasantly surprised to see how quickly 4 people could remove sandbags and metal panels.

Included in our Kodiak wrap-up was of course the tourist checklist. I had been fishing for salmon in a river, but never tried the sea from boat. I had seen whales from the air and as distant shapes on the horizon from land, but never by boat.  We were hoping to see the classic Puffins so quintessentially Alaskan, but that required a boat.  Do you see a theme?  We needed to get out on the water! So we decided to suck it up and pay the big bucks for a charter.  Just as we were looking to book, we found someone with a friend-of-a-friend boat connection, and made plans for Thursday evening.  It just so happens that the glorious sunshine and warm weather so frighteningly uncommon to Kodiak ended that day, and by the time we were on the skiff, the grey clouds, wind and mist had swept in. Despite the immediate and perpetual chill I had, it was great! We went after halibut, those giant flat fish with 2 eyes on the one top side of their head, using enormous weighted lures and meaty squids for bait.  At the first fishy spot a porpoise surfaced around us a few times; on the way to the second spot, puffins flew in front of our boat and us two Floridians startled everyone with cries of delight at the adorable, but until now, elusive, bird; and en route to the third location, a whale!!! Oddly enough this spotting was much calmer than the puffins, but ten times as exciting.  The massive creature swam off in the distance, getting closer as it dove our way.  After a short while and a few dives, it was close enough to hear its breath as it surfaced and spouted.  The whale would take several breaths that exposed its head, then dive and be gone for several minutes, but not before flashing us its tail and nearly half of its body!  Although we did not catch any fish (not even a bite, really), I loved being on the water and was thoroughly happy with my sightseeing! 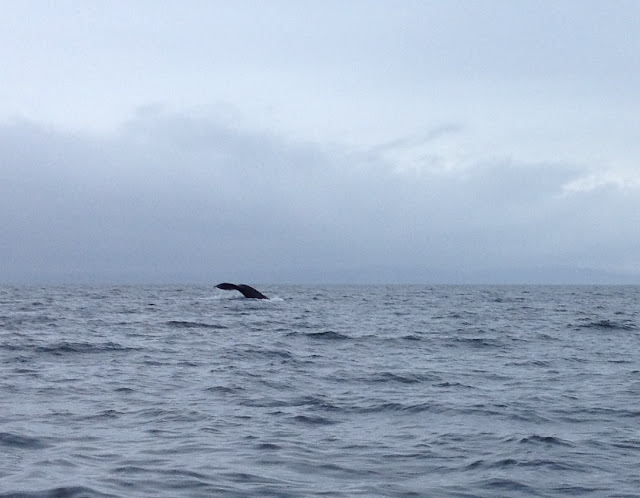 Further events involved packing up and moving out of our so famously known trailer.  As I said, I’m currently traveling home, and on my flight from Kodiak I was recognized by a fisherman; when I asked if he knew the trailer down at Monashka—that that was my home—he was perfectly familiar with it! We said farewell to our quaint residence, to the refrigerator-less, water-less, power-less trailer we called home all summer, and I couldn’t help but feel neutral about leaving it in my memories.

Just before leaving, I was able to catch one more exciting aquaculture event: Chinook hormone injections.  We’ve been collecting Kings at our Monashka weir all summer long and I was disappointed at leaving before the harvest of these fish I’ve come to know so well.  Although I am gone before that happens, I was able to partake in the preparation, whereby females are administered hormone pills to make their eggs ripe for harvest 10 days later.  A group comprised of interns, KRAA, and ADF&G, captured all 91 females in the holding tanks, used some sort of needle gun, and injected a pill into their dorsal to induce spawning.  August 10th is the concluding date of these Chinook’s lives; they have served their purpose well and will be utilized to make future generations of salmon to continue our stocking process.  I counted via clicker and Elizabeth helped flip the females into the adjacent tank after they had been netted and injected by the pros, everyone getting soaked along the way. It was an exciting end to my time here, and although the typical, miserable rainy Kodiak weather had rolled in to try and keep me captive on the island, I’m glad I was able to experience life on the Emerald Isle.

So: two overstuffed suitcases and about 6 flights later, I say goodbye to Kodiak and the wonderful summer opportunity I’ve been fortunate enough to enjoy. I can now confidently reenter the world as a student of aquaculture, due to the ultimate Alaskan salmon experience.  My horizons have certainly been broadened as I have a new perspective of the fishing world and our resources; a very important and relevant perspective that comes from the people who so depend on them. I can’t say where I’ll be in the future or what I’ll be working with next summer, but I do know my time with the Kodiak Regional Aquaculture Association will only outstandingly accelerate me towards the path of sustainability.

P.S. I’ve finally made it to Florida after 3 days of attempted travel, and went from the furthest northwest island of Kodiak to the southernmost eastern island of Key West!
Posted by Unknown at 4:53 PM