Lifestyle of the Hunter - Gatherer

I realize working with salmon in Alaska, of all places, obliges me to go fishing.  I am a fisherwoman after all, catching the favorites of the tropics at home including snapper, grouper, and the ever-tasty hogfish.  However, fishing for the same fish that my employer is trying to collect in order to provide the brood stock that will produce more salmon in the future seems improper.  So you can imagine our excitement at the arrival of the Pink salmon run, an undesirable species for the spoiled Alaskans, yet one that is so copious the ocean seems alive as they jump out of the water and try to find the river mouth.  This was the opportunity we had been waiting for: a guaranteed catch of fish you can see, and salmon we don’t feel immoral taking.

Our first encounter with the Humpys (Pinks also go by this name due to the large hunchbank males form during spawning) was while exploring the final piece of the road system we had not traveled.  I’ve mentioned the other end of the single main road here, but that was always after making a right turn at the only stop sign.  Instead, we finally went left.  The road turns to gravel after a mile, and from there we continued for a good 15 minutes before reaching a magnificent point and teeny compilation of houses overlooking a serene ocean from a black rocky cliff.  Descend this cliff, and what do we find? Pinks jumping out of the sea every 5 seconds and swirling around each other as thick as soup! A fellow intern had brought his fishing pole, and caught one within the first 5 minutes.  He let me try out my new fishing license with his rod, and I caught one right away!  It was improperly hooked, however, snagged on the back, so we unhooked him on the beach and let him swim away.  It was only a warm up.

The following night one of our fisherman friends that frequents Monashka Creek, otherwise known as home, invited us to a beach cookout at the Olds River.  We happily drove down the road on a clear sunny evening and were greeted with hotdogs over a fire.  The river was feelin’ fishy, and we quickly munched before casting into the water.  Before long, people to my left, to my right, and across the river were bringing up fish.  Soon enough my rod got heavy and tugged, and I had one! Without too strenuous of a fight, I pulled in a pink salmon, the first salmon I’ve ever caught! My excitement yielded a little bit of mayhem when I wasn’t sure what to do with the fish after I had him on the beach.  Usually, in Florida, we throw our catch in a cooler on ice and the deed is done.  My confusion about what to do with it was responded to with shouts ordering me to hit the fish with a rock. Excuse me? Yes, beat the fish with anything heavy lying on the ground nearby. When I commented that it seemed cruel, I was reminded that the alternative is to let it suffocate. In the end, I had a friend use a rock to give the fish its first blow, and if it gave a slight wiggle I’d use the rock once more.  Sad but effective.  By the time Elizabeth had caught her pink salmon, a satisfying fish after hours of misleading bites, I was emboldened enough to use a washed up tree branch to do the beating.  You might say barbaric, but a girl’s gotta do what a girl’s gotta do.  And this girl wants to eat salmon! 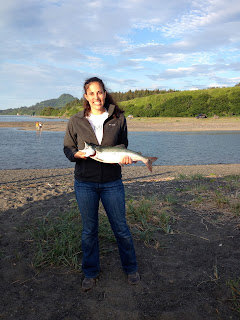 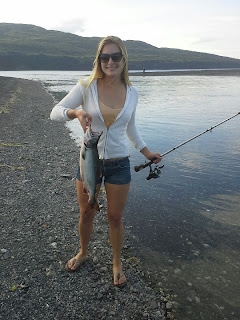 Already satisfied with my fishing license purchase, I was pleased to casually fish at the creek by our trailer that had been abandoned by most fishermen due to the unwanted Pinks.  We had each caught a salmon so the barrier had been broken and the pressure was off.  Recently the high tides have been in the late hours, and on this particular night high tide was around 11pm.  We made a point to fish the incoming tide when salmon will be entering the river to swim upstream, and at the dim hour they prefer. Waders on and pole in hand, I walked along the bank’s path that was now submerged from the tide, casting along the way, trying to make the shiny metal at the end of my line look appealing.  And suddenly—fish on!  Another Humpy within the first 10 minutes, and this one I beat with a stick myself.

While Elizabeth was gone at remote field camp (and I was alone in a trailer in Alaska with a gun), I went berry picking.  After watching the little green buds grow all summer, and listening to tales of their tasty flavor plus jam-making possibilities, the salmonberries are finally ripe and I’m happy to have caught the season.  So I took a bowl and walked into the forest; and they’re everywhere! I crawled through prickly patches in my shorts, walked through flowing streams, and stood on trees to pick the perfect bite.  It’s like an addicting scavenger hunt: bushes of green with red dots everywhere you just can’t resist running up to pluck.  About an hour and 50 scratches later, I emerged with a bowl full of plump, ripe salmonberries, ready to be jellified!  I was amazed how simple the recipe is, literally berries and sugar.  The only annoyance is boiling the liquid for long enough that it becomes thick.  Hot boiling jelly tends to bubble, and when it bursts with a splash on your skin the pain is quite comparable to a bee sting…

We tried out the Buskin River for sockeye and pink salmon a few days later, with nothing to show but wet boots and a jellyfish sting on my eye -_-  However, we were happily surprised when we went to check the weir one day and found an extremely confused and out of place Sockeye.  These salmon are the tastiest yet do not run up Monashka creek so we don’t see many.  Sockeye should not be in this river, and it was suggested we kill him for bait; but why use a perfectly delicious fish for bait? So, he became our dinner :].  It’s summer in Alaska, the salmon are running strong and the berries are in season—get out and eat!