The island of Kodiak may be the second largest in the country, yet its populated and developed places are slim.  Much of the island is actually a wildlife refuge, where bears thrive and salmon clog rivers.  Because of this, the many projects KRAA has going on across the island are often remote, without access to the outside world or the luxuries so common in America.  While I may be living in a camper beside a river and wedged between mountains at the end of the road—there is a road! And town is only a 20-minute drive, by car, I might add.  Many interns that stop over in town have been in the field for months, without a shower, without running water, or without a refrigerator.  Even so, all I could gather from people’s comments was an undecided confusion about whether or not life in a remote site was enjoyable…

Well last week I was able to decide for myself!  The multiple projects across Kodiak are seasonal: catching salmon swimming upstream, tagging smolt going downstream, establishing nets to prevent passage, etc. are all possible only in the summer when the salmon are running.  So now that the summer is winding down, the projects are ending and so the break down begins.  This is where I came in; to help the field camp Waterfall break down camp and close up for the season.  Waterfall is a gorgeous site on the island of Afognak, completely undisturbed, with bears crawling everywhere, eagles flying overhead all day long, and good ol’ fresh air.  As the name implies, there is also a magnificent waterfall right behind the cabin, one that’s too high for salmon to jump over and now has a specially designed ladder for the Pinks to travel through. That has been there since the 80’s, though, when the camp was first established, and the Pinks are a somewhat undesirable species for the spoiled Alaskans who stockpile salmon in their freezers.


The project KRAA has at Waterfall works with sockeye and commercial fishermen.  KRAA has been stocking the location with sockeye for several years now, and manages their return by stringing an indescribably enormous net that could engulf an airplane across the cove to prevent the fish from swimming upriver, enabling fishermen to catch them.  The two people stationed out here all season lived in the cutest cabin beside a waterfall while maintaining the net and organizing the commercial fishermen.  Not a bad setup at all.  However, at the end of the season the net has to come down, be cleaned, and stored for next year, which is where my assistance came in handy. Four of us worked for 4 days to close everything up, and did it all in perfect time. 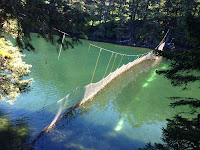 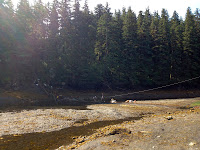 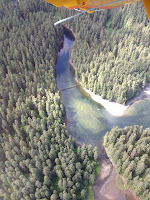 A view of the net during high tide, low tide, and from the plane (left to right) 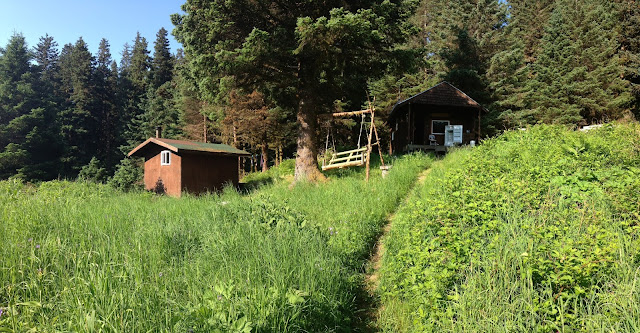 I was certainly skeptical before my trip, getting excited but controlling it because I knew there was hard work to be done.  Namely, sandbags.  The colossal net blocking the river’s outflow into the cove was suspended by two trees on either side of the banks, which were high up on rocky cliffs, and was weighted down at the bottom by a thick lead line.  To prevent this bottom from swimming around during tidal flows, hundreds upon hundreds of sandbags were placed over the line, sandbags that had to be removed from the water during low tide before we began dismantling the net.  Needless to say I am now extremely buff after wading through currents and walking through sand with bulky bags the weight of large children!

Each accomplishment of hard labor was hugely satisfying, and every meal I had was the best ever.  On this trip I discovered the wonderful world of nutella and peanut butter! All I can say is YUM.  A lot of our work revolved around the tides because they are so extreme up here.  At high tide the net is engulfed in water and the sand you stood on at low tide, carrying sandbag after sandbag, is now ten feet under.  So we would work quickly when the tide was out, power washing the net to clean it from seaweed gunk and lowering it from the tree-suspended cable, then lay it on a sunny bank to dry while the tide came back in.  After such an intense day a shower would have done me good, yet at field camp there is no running water and no shower.  Instead, there is a hot steam room contraption called a baña, a homemade shelter that has a wood stove surrounded by hot rocks you pour water on to create steam.  I had heard of this imitate shower from some interns that came to town, but couldn’t picture it or understand the concept of cleaning yourself without running water.  Now that the opportunity presented itself—and since I was covered in low tide—I had to try it! I learned how to split wood for the first time, helped start the fire, kept it roaring, and placed buckets full of water in the hot wooden room to create the steam.  When the stream water in the buckets warms up, there are ladles and cups you can use to pour it over your dirty self. After reliving Florida’s stifling humid heat for a good 20 minutes, I emerged with the same sedated relaxation that comes after a hot tub. It was magical.

Now, our hard work was absolutely rewarded with perfect sunny weather and innumerable wildlife sightings.  Before this trip I had never seen a bear, and I was losing faith that they existed. But after the first day at Waterfall, which was only half a day, I saw 8!  I saw bears splashing in the river, I saw bears moseying along the bank, I saw them in the cabin’s front yard field, I saw a bear swimming in the pool of a waterfall, I even saw one catch a fish, and finally, I saw a mother with cubs :]. They were absolutely everywhere: one watched me brush my teeth at the river the first night, and one stumbled upon us at its favorite fishing hole under the falls where we were doing the same thing.  It got to the point where I’d tell the boys, “I’m going to look for bears,” and a sow with 2 cubs walked through the river!  While of course they have the potential to be dangerous and we always carried a gun, most bears are hilariously goofy creatures that don’t know their own size.  Every bear I saw had a personality, from the overprotective mom to the playful one contemplating a log in the river. And that’s only bears. 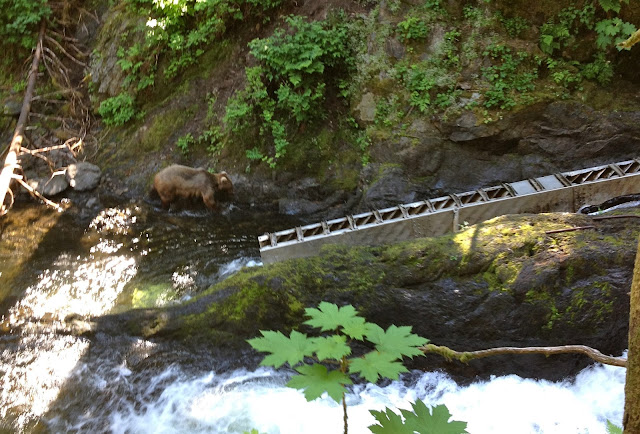 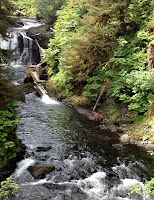 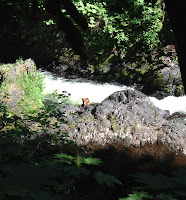 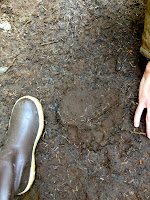 There was a resident fox that hung out around the cabin who had been named smoky, and if we had stayed longer he would easily become a pet.  Eagles filled the sky, plunging from one tree to another and soaring through the forest gap created by the river.  We saw many juvenile eagles, noticeable by their brown and white mottled feathers, which were often playing around in twos. While working down by the net, I saw an eagle get irritated by the selfish seagulls, finally swooping down to snag their catch.  I also saw one fly overhead with a fish in his talons!  Out where the river meets the sea, in the cove where we had the net, is where the tide hugely fluctuates.  When the tide fully rises and the smolt are swimming around the cove, seals are able to swim in for a snack.  The juvenile salmon haphazardly jump out of the water, no one knows why, popcorn style.  So even us landlubbers can tell they are plentiful in the newly filled cove, and the seals would come in each evening for the tide, working in a pair to round up the fish then take a bite.  My list of encounters goes on, but I am so thrilled to have had the quintessential Alaskan wilderness experience.

My experience was made complete by our form of transport…a float plane!  These old tin toys are from the ‘50s and ‘60s, and have not been made since.  If you have any aversion to flying, I would suggest against this flight, but luckily I do not, and welcomed such a unique journey.  Because the field sites of KRAA are so remote, this is often the only way to get there because they can land on water, which is everywhere in Kodiak.  While flying over land and sea, you’re just high enough to have a view of the mountains on the mainland Alaskan peninsula, but close enough to spy sea otters bobbing on the surface.  We flew over bright blue ocean with shadows of kelp sea monsters, and between mountainous rocks being thrust into the sky as these mountains continue to grow. 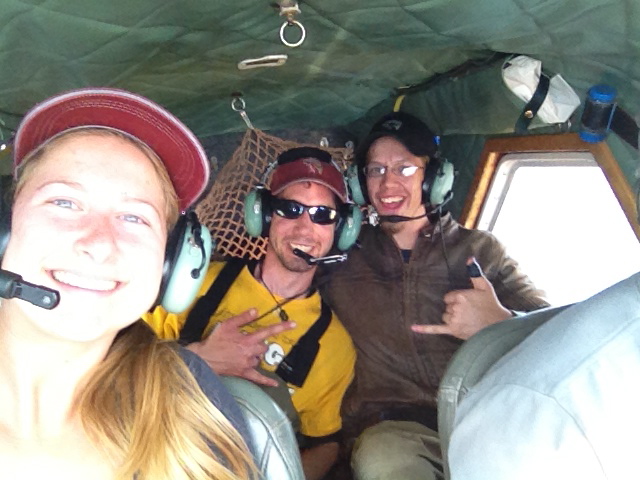 I had heard stories of people seeing whales while flying to field camp, which of course made me excitedly alert and always on the lookout.  Not a single splash on the way over, but on the flight back—the one where I won a rock-paper-scissors game to get the front seat—the pilot said he had seen some.  Sure enough a white splash in the middle of endless blue caught my eye, and WHALES!  I couldn’t believe it!  The pilot told us they were Fin whales, and I believe there was a calf in the pod that kept surfacing for air.  From here it only gets better.  As we flew over another piece of jutting land and began crossing the watery pass between Afognak island and mainland Kodiak island, Humpback whales were breaching!  This splash was obvious as an enormous mammal broke the smooth sea surface, flying into the air and falling with a slosh display.  My screams of excitement could be heard through our headphones, and the pilot told his base he was circling around some whales real quick before we landed.  He circled their beautiful dancing leaps, and we got to see one lay on its side and smack its fin on the surface after breaching.  I couldn’t have been happier, and smiled the whole way home. 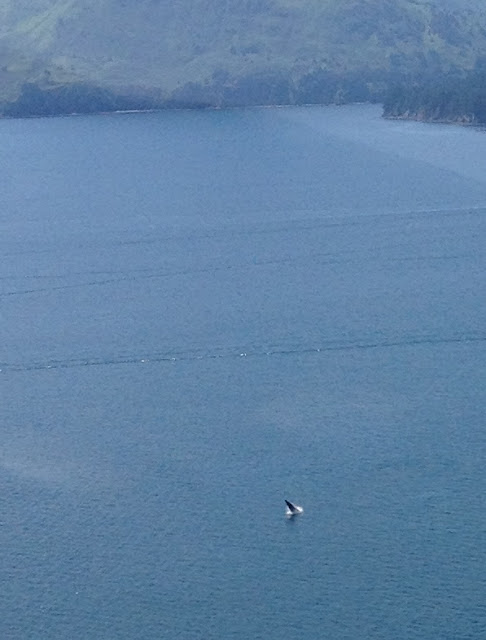 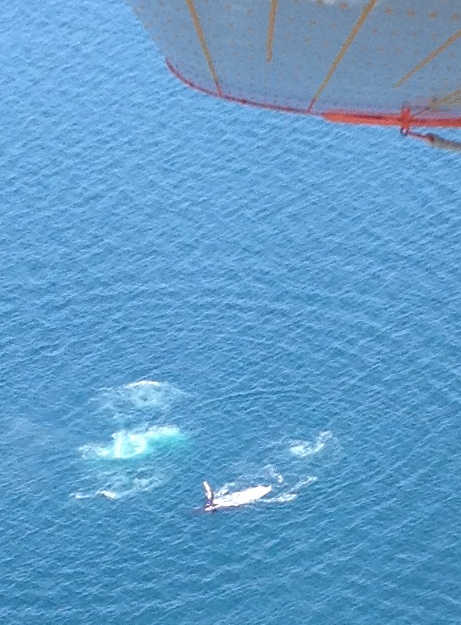