Where The Road Ends...

The past several days have been a muddled mix of work and play. Over the weekend we were granted the car and did some exploring—about all that can be done by car.  Although Kodiak is a large island, there is very little that is accessible as only ~40 miles of road is constructed.  The town is the center of activity, and homes extend to the northeastern tip of the island, but beyond that in all directions are only mountains, lakes, and ocean. So we were finally able to scratch the exploration itch and drove through the most surreal scenery, winding up and down endless mountains with green bases and snow tips, stopping to marvel at every view point, running down to beaches covered with black chalky sand, and avoiding the random unexpected animal.  One stop called Surfers Beach had this black volcanic sand and was shrouded in misty fog, and lacking all color it felt as though you were in a black and white film. 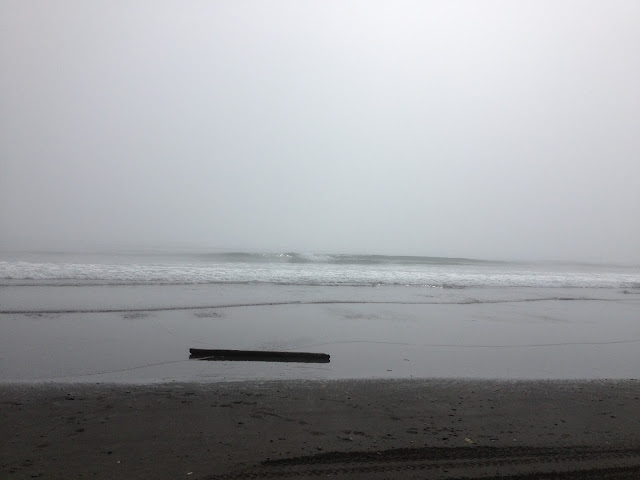 We followed the road to its end, where the map told us there was a ‘launch pad.’ Not certain what the government is launching, but we were intrigued to find this station in the middle of wild mountains and hidden by the low fog. It was a strange feeling driving by the deserted control center, technology research building, and mysterious rectangle jutting into the sky, all surrounded by fence and warning signs.  Not to mention the threatening light signals atop signs that say to flee the area if sirens sound. While leaving this Alaska area 51 of sorts, we saw our first bison grazing alongside the road. Such an unexpected animal, and an enormous one! I didn’t look in his eyes for too long. The next day we were educated on salmon and the productions of the Kodiak Regional Aquaculture Association.  This organization has numerous field sites across the island of Kodiak, where they harvest salmon for different purposes but all with the same goal.  The overall picture is to aid the natural process of increasing fish populations by stocking lakes or giving juveniles a better chance at survival. To do this, KRAA catches all 5 species of salmon found in the region when they return to rivers to spawn, in order to collect the eggs.  These are then taken to a hatchery, where they’re reared for different time periods depending on the species, and finally released several months to a year later.  As you can assume, this hugely increases the salmon stocks, which largely increases the enjoyment of fishermen!

At the other end of this single main road on the island, is our new home.  Myself and the other intern, Elizabeth, will be stationed at Monashka Creek, living in a camper beside a salmon run river.  Our backyard consists of magnificent mountains and a wide stretch of beach, depending which direction you look.  Here we’ll be dealing with King salmon, also known as Chinook (pronounced shinook), capturing and transporting those that swim up river into our contraption. Today we spent the day getting our camper house ready for inhabitants, doing errands, wiping off the dust, and checking out the power system—we even have a radio! We also picked up fisheries supplies including river boots, uniform hats, and the always-attractive fishermen waders. 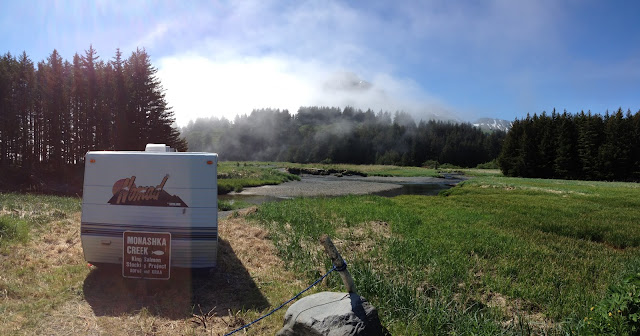 So you can see why I say a mix of work and play: I still cannot believe where I am and the work I’m doing…mountains, stream, and beach are right outside my home, all while I work with mighty majestic salmon.  I’ve already become more biased towards fresh fish, and a shirt I saw in town sums it up well: “Friends don’t let friends eat farmed fish.”  Make sure you know where your fish comes from, how it was caught, and how it got to you. Tomorrow we begin working with the large king salmon in our backyard trap, and I’ll be sure to post photos!